I don’t really remember when I first encountered Too Much Coffee Man. Shannon Wheeler debuted him as a mini-comic in 1991, and he started self-publication with Adhesive Comics in 1993 (to 2005, and licensed to Dark Horse from 1994 to 2011). I was in Japan from 1992 to ’96, so I didn’t have access to anything that TMCM ran in. But, I lived in Dallas, TX, for a while, and I’d visit Austin a couple times a month. At some point, I started reading the Austin Chronicle free paper, which carried TMCM, and I was attracted to it right away. Then, Shannon had a new release book signing at BookPeople for Parade of Tirade (Nov. 30, 1999). I went, I bought a copy, I got it signed, and I’ve been hooked ever since. I like the artwork, the characters are oddball while remaining believable, and Shannon’s not afraid to say stuff that offends people that he doesn’t like. I was very happy to see him show up on GoComics. The archive goes all the way back to 2003, and that’s a LOT of Coffee.

BC: Who are you?
SW: I’m an aging white heterosexual male with a reasonably happy childhood.

BC: What’s that mean?
SW: I grew up in Berkeley with family in Texas. I was constantly defending each place to the other.

BC: Do you consider yourself a cartoonist, an illustrator, an artist, or something else?
SW: I like cartoonist as a term – that way you don’t have to be a great writer or a great artist.

BC: How did you get your start then?
SW: Before I could read I would look at cartoons in the newspaper. I suppose you could say I read the pictures. I was amazed that a story could be told in 3-4 small drawings. I saw it as magic. I wanted to learn how to make that magic. I’m still amazed by it.

BC: What were your breaks?
SW: My biggest breaks have been getting jobs with deadlines. I got a spot in my college newspaper and I had to draw a comic 5 days a week. I learned to work.

BC: How did the TMCM opera go, and is this something you’d like to do more of?
SW: The opera was amazing. It’s been performed dozens of times in multiple cities. We’re looking at a run in Albuquerque soon. I would like to rework it to be a one-act, one-man piece. It’s an enormous amount of work. I’d consider doing an animation to go along with it.

(Too Much Coffee Man)

BC: Has TMCM changed much? Or, have you?
SW: TMCM has definitely evolved. I used to really push a plot. Early on he’d go to Mars, save the universe, go to the future (where everyone was housed/clothed/fed because everyone was in jail), etc. Now he fights a squirrel. It’s gotten more existential. I’ve outgrown him in the sense that I draw stories with him when I’m inspired – but he’s still there. I have a mental theater and when I put Too Much Coffee Man on stage he starts talking like he’s never left. I suppose I have a few more TMCM stories in me.

BC: Which of your works are you most happy with?
SW: Certain comics are tight. I’m finishing a short story about a kid I knew who had a micro-penis. I’m proud of that story. It’s funny and sad in all the right places. A solid single panel comic is always amazing. I like my “help I’ve been stabbed with a pencil,” “Would you like some crap on your salad?”

BC: Where can readers find your books?
SW: I have a couple ‘best-of’ comics with comixology and Dark Horse is about to republish my Too Much Coffee Man Omnibus. Top Shelf is collecting up another set of my single panel comics, too. BC: How do you approach that blank sheet of white paper?
SW: I start with warm-ups – drawing cats, fish, cups of coffee. My best ideas come when I’m falling asleep and I exist between conscious and unconsciousness.

BC: If your strip had a soundtrack, what would it be/sound like?
SW: Hopefully Dave Brubeck or the Ramones. More likely it’s Kenny G.

SW: I met Gahan Wilson at the New Yorker offices. Cartoonists meet with Bob Mankoff (the cartoon editor) once a week then everyone goes out to lunch. I met a lot of amazing cartoonists that way.

SW: A friend of mine did a sculpture for Crumb and invited me to dinner. Crumb and I talked about the 60’s, hippies, and parenting. It turns out he visited my dad’s commune back in the day.

SW: The Fabulous Furry Freak Brothers comics were around the house when I was growing up and had a big influence on my art. I went to visit a girlfriend in Paris when I was 19. My uncle asked me to bring his friend Gilbert some old photos. It was Gilbert Shelton (Freak Bro. artist) who, unbeknownst to me, was a friend of the family.

(Early Too Much Coffee Men)

SW: One of the few bad experiences I had was when I was a kid (about 18). I took a poster to Stanley Mouse. He was charging $20 for a signature. I didn’t have it. He told me that by signing my poster it would raise the value to $60 and I’d turn a profit. I told him it was for me – that I respected his work and I’d never sell it. He said it was $20 for a signature. I told him to keep his f*cking poster.

BC: Do you follow any other comic strips right now?
SW: I hate to say it but I usually wait for the books. Holy crap – My Friend Dahmer is amazing. Other books I’ve really liked are Couch Tag, Story of My Tits, Bacchus. March is pretty good too.

BC: Is March by Nate Powell; Bacchus by Eddie Campbell?
SW: Yep. March by Nate (and Andrew) and Bacchus by Campbell. I just ordered the Gene Colon Howard the Duck books. They were favorites when I was a kid. It’s the only comic book ever to go down in value when the movie came out. I’ll see how they hold up.

BC: What do you look for when you read someone else’s strips?
SW: Faults. I get jealous easily.

BC: What do you think makes for a good comic?
SW: Surprise and immersion. When I don’t know what will happen next and I’m in their world.

(Too Much Coffee Man)

BC: Do you use Patreon or Kickstarter?
SW: These sites rely on a solid fan base and a lot of maintenance. I’m worried that I’d fail getting enough fans to support me – or if, by some miracle, I got enough fans I’d fail delivering whatever I promised. 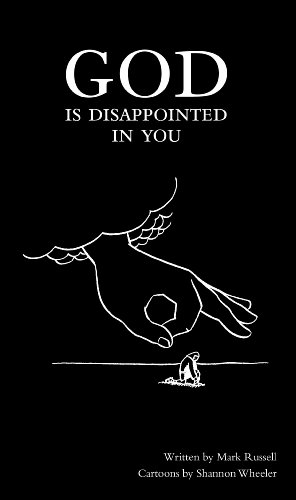 BC: Do you have any projects coming up?
SW: I’ll be at the Miami Book Fest promoting the sequel to the Bible I cartooned for, Apocrypha Now. The first book, God Is Disappointed in You was a reworking of the Bible (with cartoons) did well (on a 3rd printing).

Poll: Have you ever had “too much” coffee?

One thought on “Shannon Wheeler Interview”